You are here: Home / Advocacy

Zonta advocacy is action taken in “the public interest” or for “the greater good” with respect to empowering women and girls and promoting and protecting their human rights.

Zonta international advocates primarily through its General Consultative Status with ECOSOC (United Nations Economic and Social Council) at the United Nations (UN) and its Participatory Status at the Council of Europe (CoE).  Zonta International has been affiliated with the UN since 1969 and has been represented in the CoE since 1983.  Through these relationships, Zonta uses its strong voice to present our priorities and demand focused action when advocating for gender equality and women’s human rights worldwide,

Zonta clubs monitor laws and policies and their impact on women, participate in hearings and public meetings with local politicians and administrators and host speakers and panels to raise awareness about issues affecting women at the local level.

Zonta International is nonpartisan and nonsectarian.

In 2012, Zonta International launched “Zonta Says NO to Violence Against Women,” a global campaign to raise awareness of and increase advocacy actions to end violence against women and girls around the world.

Every year, during the 16 Days of Activism against Gender Violence, Zonta clubs and Zontians around the world take action and advocate to end gender-based violence in all its forms.   Every year, the Zonta Club of Cape Girardeau works to mark the 16 Days of Activism against Gender-Based Violence (GBV) campaign beginning November 25, the International Day for the Elimination of Violence against Women, and ending on December 10, Human Rights Day, by highlighting the indelible fact that violence against girls and women is a human rights violation. 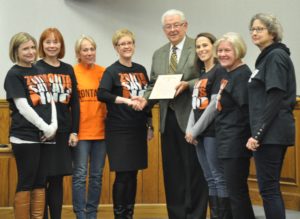 This past year, the Club began with a proclamation from the City of Cape Girardeau during its Nov. 20 City Council meeting to highlight the days and awareness-raising activities, including attracting attention and generating public support.

The theme of the 2017 Campaign is “Together We Can End GBV in Education!” and uses the human rights framework to not only raise awareness about gender-based violence, but also to eradicate it once and for all.

The Cape Zontians used social media to promote awareness and education about the days of activism with a focus on education. The Club also hosted a Pages of Empowerment Book Club with readings focused on women’s issues on Nov. 29 at Catapult Creative House.

In addition, they partnered with its Golden Z Club and the Redhawks Rising student organization at Southeast Missouri State University to observe the 16 Days of Activism and the groups’ shared focus of eliminating gender-based violence with a Peace Pole project on Dec. 4. Peace poles are hand-crafted monuments recognized as the most prominent international symbol and monument to peace.

Since 1991, the Center for Women’s Global Leadership at Rutgers University has led the 16 Days of Activism campaign, involving more than 5,478 individuals, organizations, and policy makers from more than 180 countries around the world. Twenty years after the U.N. Beijing Declaration and Platform for Action, progress has been made, but problems still hinder women and girls’ advancement and full participation in society. Ending violence against girls and women will transform the world. That’s the philosophy behind the 16 Days campaign, which has been a catalyst toward ending gender-based violence for nearly a quarter-century.