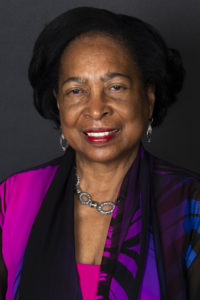 Dr. Loretta Prater is a retired Professor and Dean of the College of Health and Human Services at Southeast Missouri State University.  The college included the Departments of Social Work, Criminal Justice and Sociology, Human Environmental Studies, Nursing, Speech Pathology and Health, Human Performance and Recreation.

Dr. Prater is the 2005 recipient of the Zonta Woman of Achievement Award; is featured in the 9th edition of Who’s Who Among America’s Teachers and received the Outstanding African American Alumni Award in Education from the University of Tennessee.  Dr. Prater was a panelist for the International Women’s Day forum sponsored by Southeast Missouri State University and the Zonta Club of Cape Girardeau.  She has written chapters in several books and is published in the journals of Marriage and Family Review and Exceptional Children.  She is the author of Excessive Use of Force: One Mother’s Struggle against Police Brutality and Misconduct.  She has served on numerous boards in various communities and states, including serving as President of the United Way.  She is a member of Missouri’s Family and Community Trust Board, and the Community Advisory Council for the Missouri Foundation for Health.